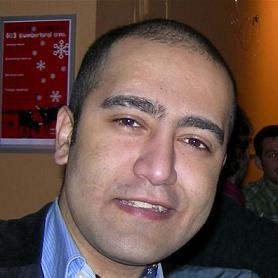 Mahdi Darius Nazemroaya, together with Thierry Meyssan are currently stranded in the media centre of the Rixos hotel in Tripoli amidst heavy fighting around the hotel.

We ask our readers to reflect on what Mahdi was attempting to achieve at the media center of the Rixos hotel: honest factual reporting, with a concern for human life, in solidarity with those Libyan men, women and children who lost their lives in bombing raids on residential areas, schools and hospitals.

Mahdi’s life is threatened for telling the truth, for exposing NATO war crimes.

“Democracy building” in Libya, we are told, requires the extensive bombing of an entire country, under NATO’s “Responsibility to Protect” (R2P).

But Mahdi questions that concept. He challenges the very foundations of war propaganda, which upholds an act of war as a peacemaking endeavor.

In the course of the last few days, all our time and energy have been directed towards ensuring the safety of Mahdi, Thierry and several other independent journalists trapped in the Rixos Hotel.

The atmosphere within the media centre of the Rixos Hotel in Tripoli must be understood.

The mainstream media, including CNN and the BBC have direct links to NATO, the Transitional Council and Rebel Forces. They are serving NATO interests in a direct way through massive media distortion.

At the same time, those within the Rixos Media Centre who are committed to the truth are the the object of veiled threats. In the case of Mahdi, the threats were very explicit.

Those who say the truth are threatened.

Those who lie and accept the NATO consensus, their lives will be protected. NATO special forces operating within rebel ranks will ensure their safety.

It this unsavoury environment, personal ties have broken down. The independent media journalists as well as those from non-NATO countries including China, Iran, Latin America are considered “persona non grata” by the mainstream media groups within the hotel.

Mahdi says the truth. He directly challenges the lies of the mainstream media.

What he is describing is the destruction of an entire country, of its institutions, its infrastructure.

This killing and destruction, we are told, is required to instate “democracy” under the colonial flag of King Idris.

We are being lied to in the most despicable way. The victims of NATO aggression are designated as “war criminals”, whereas the perpetrators of war are welcomed as Liberators.

The lie has become the truth. and that’s why Mahdi life is threatened.

War becomes peace, according to the NATO consensus.

The “international community” has given a rubber stamp to NATO’s bombing campaign on the grounds that Gadaffi is a dictator.

How could it be otherwise: Every single news media across the land, people in government, intellectuals have accepted this consensus.

Realities are turned upside down. People are no longer able to think.

They accept the consensus because it emanates from a higher authority which they dare not question.

In fact that is the very basis of an inquisitorial doctrine.

The “humanitarian” underpinnings of “Responsiblity to Protect”, however, outdwarf the Spanish Inquisition by a long shot.

What we are dealing with is a dogma which nobody can question.

Mahdi Nazemroaya has challenged this consensus by revealing the lies of the mainstream media.

Once the NATO consensus is broken, the legitimacy of the warmongers collapses like a deck of cards.

And that is why Mahdi Nazemroaya’s life is threatened.

This is warfare in the 21st Century. It is a war which claims not to be a war.

All the protocols and conventions pertaining to war do not apply.

The International Committee of the Red Cross (ICRC) is not be found on the ground. They have no mandate because officially this is not a war.

This is the most despicable and immoral war in history, to the extent that even antiwar activists, left wing politicians and so-called progressives applaud. “Gadaffi is the dictator, he must go”.

Its a Blitzkrieg with the most advanced weapons systems. 20,000 sorties since March 31, according to NATO stats, close to 8000 strike sorties.

Each strike sortie involves several targets, most of which are civilian targets.

Compare this to the bombings of World War II or Vietnam…

Our resolve is to bring back Mahdi to Canada, to ensure his safe return.

Spread the word far and wide.

Link to this original artile: www.globalresearch.ca/index.php?context=va&aid=26164

The Centre for Research on Globalisation (CRG) is an independent research and media organization based in Montreal.  The CRG is a registered non profit organization in the province of Quebec, Canada.

Since September 2001, we have established an extensive archive of news articles, in-depth reports and analysis on issues which are barely covered by the mainstream media.

In an era of media disinformation, our focus has essentially been to center on the “unspoken truth“.

From Wikipedia, the free encyclopedia (we encourage you to read the full page)

The CNL grants permission to cross-post original CanadaNewsLibre articles on community internet sites as long as the text & title are not modified. The source and the author’s copyright must be displayed.

https://canadanewslibre contains copyrighted material the use of which has not always been specifically authorized by the copyright owner. We are making such material available to our readers under the provisions of “fair use” in an effort to advance a better understanding of political, economic and social issues. The material on this site is distributed without profit to those who have expressed a prior interest in receiving it for research and educational purposes. If you wish to use copyrighted material for purposes other than “fair use” you must request permission from the copyright owner.