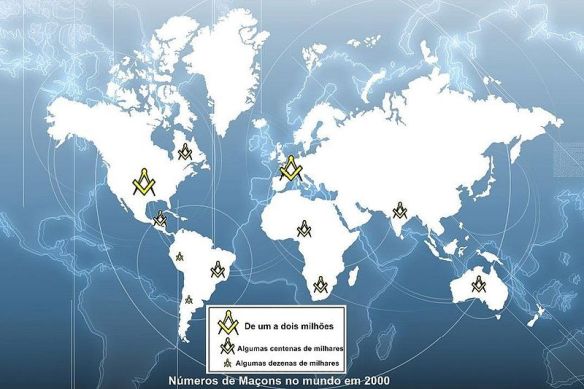 Freemasonry in the world / Wiki Commons *

“…if Keenan’s case and facts are in order, this trial will, at the very least, provide citizens all over the world a view through the window of the shadowy organizations of Freemasonry, banking, and government.”
Brandon Turbeville

On November 23, 2011, a lawsuit of unprecedented proportions was filed with the U.S. District Court in the Southern District of New York. The lawsuit, filed by Neil Keenan who is acting as a representative of the Dragon Family, takes aim at a variety of well-known individuals and institutions that span the entire globe and encompass both the public and private sectors.

The Plaintiff, Neil Keenan, claims that he was entrusted back in 2009 with financial instruments which included Federal Reserve Notes worth $124.5 billion, two Japanese government bonds which have a combined face value of $19 billion, and a U.S. “Kennedy” bond which carries a face value of $1 billion by The Dragon Family, a group of very wealthy and reclusive Asian families.

According to the lawsuit, the accrued interest value of these instruments alone was $1 trillion back in 2009, when the alleged crime against Keenan (and hence the Dragon Family) occurred.

As reported by Dan McCue of Courthouse News Service, the only mainstream news organization to cover this lawsuit to date, “In his remarkable complaint, Keenan claims that the U.S. government [received] enormous amounts of money – delivered in gold and other precious metals – from the Dragon Family many years ago, and that the money was placed into the Federal Reserve System for the benefit and underwriting support of the dollar, ‘which was to become and currently remains the global reserve currency.’”

Keenan further describes the Dragon Family in his lawsuit by stating that:

The Dragon Family abstains from public view and knowledge, but, upon information and belief, acts for the good and better benefit of the world in constant coordination with higher levels of global financial organizations, in particular, the Federal Reserve System.

During the course of its existence over the last century, the Dragon family has accumulated great wealth by having provided the Federal Reserve Bank and the United States Government with Asset assignments of gold and silver via certain accounts held in Switzerland, for which it has received consideration in the form of a variety of Notes, Bonds, and Certificates such as those described . . . that are an obligation of the Federal Reserve System.

However, the lawsuit does not merely target the Federal Reserve. Below is the list of defendants provided in the document filed with the U.S. District Court.

The incident that directly relates to Keenan’s lawsuit dates back to 2009, when two Japanese citizens were detained in Italy, and the bonds they were holding, which totaled $134.5 billion, were seized. The two men were Mitsuyoshi Watanabe and Akihiko Yamaguchi; the latter being considered Neil Keenan’s predecessor in acting as an agent of the Dragon Family.

This incident was reported early on by the mainstream media, even making its way up to Glenn Beck’s television show shortly after it occurred. However, the story quickly disappeared from the mainstream and has not reported on since. Here are some mainstream reports on the incident which are still available online.

Even the alternative media has been largely silent on the story, with the exception of Benjamin Fulford, who has been releasing information related to the lawsuit in question and the surrounding events for some time.

What’s interesting about the Beck coverage, though, is how the level of money being discussed here is put into perspective. During his interview with Joe Wiesenthal, the editor of BusinessInsider.com, Beck put up a list of public, unclassified numbers of the amount of the U.S. bonds held by other countries. The list was as follows:

Keep in mind, the amount of money seized from the two Japanese men, was $134.5 billion worth of bonds. Compare this amount to the list above and one can see just how huge an amount of money is being discussed. The amount found in the possession of these two men is so large that, if all the bonds had come from Russia, it would only have $2.5 billion of U.S. bonds left.

Wiesenthal and Beck both commented on how large an amount of money this is – not just in monetary terms, but also in the ability to produce it. Even if it were a forgery, the capabilities to create such a large-scale replica would require technology most likely held by governments, not rogue counterfeiters. As Wiesenthal noted, “it would be the kind of technology you would expect only a government to have.”

This is where the story takes yet another bizarre turn.

Keenan claims that after he took possession of the instruments at the heart of this lawsuit and, a month after the two Japanese men were detained, a man named Leo Zagami arrived on the scene. According to the complaint, Zagami, “ a self-described 33rd Degree Freemason, who, as of April 2008, had reportedly claimed to be the leader of the breakaway faction of the Knights of Templar and high-level Freemasons centered around the elite of the Masons P2 (propaganda Due) Lodge in Monte Carlo.”

Zagami also claimed to be a representative of the Vatican Illuminati and other European secret societies. He also claimed that he was trying to make contact with “certain Asian Secret Societies.

During meetings with individuals only described as “contacts,” it is claimed that Zagami told one of these contacts that the two Japanese men, Yamaguchi and Watanabe, had been set up and that he had inside information about the instruments that were seized.

Eventually, the mutual contact was introduced to Daniele Dal Bosco, a Vatican banker and associate of the P2 Masonic Lodge, as well as fellow defendant in Keenan’s lawsuit, whom Keenan was told “would be able ‘to cash the bonds seized by the Italian Treasury Police.’”

Keenan claims that he was in constant contact with Dal Bosco via Internet Skype and had agreed to meet in Italy. It is also claimed by Keenan that during the course of these conversations, “Dal Bosco represented that he was not only financial advisor to Zagami, but also to the Vatican, Vatican City, Rome, and the Treasurer to the P2 Masonic Lodge.”

Over time, Keenan claims, he came to trust Dal Bosco and turned the bonds over to him “for temporary safekeeping and custodianship.”

After the bonds were in Dal Bosco’s possession, the lawsuit alleges that Dal Bosco made off with them and attempted to sell them “in the global marketplace through stealth, conversion and bribery.”

Keenan also claims that as all of these events were unfolding, he was routinely offered bribes by high-level officials of $100 million to “release” the financial instruments without disclosing to the Dragon Family where they had gone.  The plan was to allow the instruments to be converted to a UN “Sovereign Program” which would be entirely, “under the auspices, protection and umbrella of the sovereign immunity enjoyed by the defendants.”

On a side note, it should be mentioned that within the 111-page document, Keenan makes an astounding claim, and one that should not be ignored if, for no other reason, because it is so large an amount of money with almost incalculable repercussions for the United States and its private central banking system. The document states:

During the course of its existence over the last century, the Dragon Family has accumulated great wealth by having provided the Federal Reserve Bank and the United States Government with asset assignments of gold and silver via certain accounts held in Switzerland, for which it has received consideration in the form of a variety of Notes, Bonds, Certificates such as those described in ¶ 2 that are an obligation of the Federal Reserve System. Upon information and belief, these bonds have values ranging in the many Thousands of Trillions of United States Dollars, a relatively small portion of which is involved in the claims giving rise to this action. Each of these currencies, such as the DFFI (Dragon Family Financial Instrument) involved in this action, was and remains duly registered within the Federal Reserve System and are directly verifiable by the Federal Reserve through its efficient verification system and screening process. [emphasis added]

Thousands of trillions is quite the sum of money. Although the amount of financial claims in this lawsuit is not anywhere close to the amount specified above, the fact that any individual, family, or institution would retain this large sum of money in U.S. Dollars is alarming, especially to the system which might be liable to pay it back.

Although the claims made by Keenan in this lawsuit can only be looked at as accusations at this point, one must wonder what the outcome of the case will be, even if it is unsuccessful in financial terms. One also wonders whether or not, if the trial is allowed to move forward, if this lawsuit will function much as the Jim Garrison JFK trial functioned many years ago. That is, a failure to procure a conviction or legal victory, but a clear documentation of the inconsistencies and official stories handed down to the public from on high.

Perhaps, if Keenan’s case and facts are in order, this trial will, at the very least, provide citizens all over the world a view through the window of the shadowy organizations of Freemasonry, banking, and government.

At this time, Keenan is seeking “the return of the stolen instruments, punitive damages and court costs on multiple claims of fraud, breach of contract and violation of international law.”

I encourage every reader to read David Wilcock’s article, “CONFIRMED: The Trillion-Dollar Lawsuit That Could End Financial Tyranny,” published at Divine Cosmos, for an excellent and in-depth breakdown of the lawsuit discussed in this article.

Brandon Turbeville is an author out of Mullins, South Carolina. He has a Bachelor’s Degree from Francis Marion University where he earned the Pee Dee Electric Scholar’s Award as an undergraduate. He has had numerous articles published dealing with a wide variety of subjects including health, economics, and civil liberties. He also the author of Codex Alimentarius – The End of Health Freedom, 7 Real Conspiracies and Five Sense Solutions.

* Image reference:
Mapa mundo maçonaria, by Light Warrior
Source: This work is derived from this map in the French version, translated in portuguese http://commons.wikimedia.org/wiki/File:Mapa_mundo_ma%C3%A7onaria_pt.jpg
This file is licensed under the Creative Commons Attribution 3.0 Unported license.