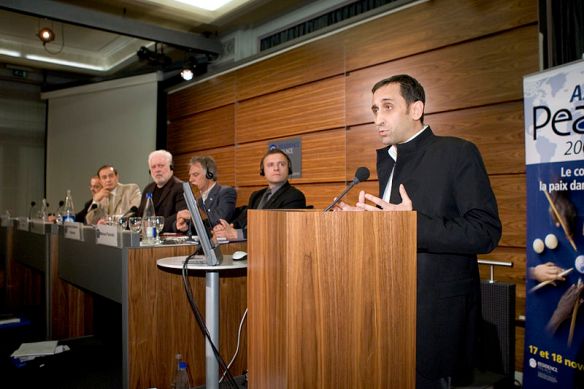 “Western and Gulf powers have launched the largest secret war operation since the Contra war in Nicaragua.” – Thierry Meyssan (1)

“The Obama Administation is increasing lethal aid to Syrian rebels and will openly move toward direct military support of the Syrian opposition fighters that are carrying out daily attacks, including massacres of civilians, report a number of Washington-based intelligence sources.” – LaRouchePAC (2)

The battle of Damascus has begun

Western and Gulf powers have launched the largest secret war operation since the Contra war in Nicaragua.

The Battle of Damascus is not intended to topple President Bashar al-Assad, but to fracture the Syrian Army to better ensure the domination of Israel and the U.S. over the Middle East. While the city is bracing for a new assault by foreign mercenaries, Thierry Meyssan takes stock of the situation.

Coming from abroad, the “Contras” started their invasion of Syria by taking border posts.

Over the past five days Washington and Paris have launched an attack operation dubbed “Damascus Volcano and Syrian Earthquake.” It is not a new campaign of aerial bombardment, but a secret military operation, similar to the one used in Central America during the Reagan era.

Within a few days, 40 to 60 000 Contras, mostly Libyans, entered the country, most often via the Jordanian border. The majority of them are attached to the “Syrian” Free Army, a secret operations front for NATO under Turkish command. Some are affiliated with groups of fanatics, including Al-Qaeda, under Qatar’s command or factions of the Saudi Royal Family, the Sudairi. Along the way, they took some border posts, and then moved to the capital where they have sown confusion by attacking random targets: police groups or isolated military.

Wednesday morning, an explosion destroyed National Security headquarters where some members of the National Security Council were meeting. It cost the lives of General Daoud Rajha (Defence Minister), of General Assef Shawkat (Deputy Minister) and of General Hassan Turkmani (Assistant Vice President of the Republic). The mode of attack remains uncertain: it could have been either a suicide bomber or a stealth drone.

Washington hoped that the partial decapitation of the military would lead some senior officers to defect with their units, or even to turn against the civilian government. This has not happened. President Bashar al-Assad immediately signed decrees appointing successors to the fallen heroes and the seamless continuity of the state was ensured.

In Paris, Berlin and Washington, sponsors of the operation continued their unworthy game of condemning terrorist action while reaffirming their political and logistical support for the terrorists. Shamelessly, they concluded that the responsibility for these killings lay not with the culprits, but with the victims in that they had refused to resign under pressure and surrender their homeland to western rapacity.

Caracas and Tehran have sent their condolences to Syria, stressing that the attack was sponsored and funded by Western and Gulf powers Moscow has also expressed condolences and affirmed that requesting Security Council’s sanctions against Syria amounted to political support for the attacking terrorists.

Information Minister Omran al-Zou’bi delivers a message on national television after the attack that partially decapitated the Syrian Army.

National television channels have begun to broadcast military clips and patriotic songs several times per hour. Interrupting programs, the Information Minister al-Omran Zou’bi called for the mobilization of everyone: the time for political disputes between government and opposition is over. The enemy is at the gates. Referring to my Komsomolskaya Pravda article [1], he warned his countrymen of the imminent launch of the propaganda operation prepared by Gulf and Western channels in order to demoralize the people. Then, he put the lie to Gulf network propaganda according to which a mutiny had broken out in the fourth division and explosions had devastated its main barracks.

In Lebanon, Sayyed Hassan Nasrallah recalled the brotherhood of arms uniting Hezbollah and Syria against Zionist expansionism, and assured the Syrian Army of its support.

The bomb attack was the signal for the second part of the operation. Commandos infiltrated the capital, then attacked various more or less chosen targets. Thus, a group of about a hundred Contras attacked the house adjacent to my apartment in the cry of Allah Akbar. A senior military official resides there. Ten hours of uninterrupted fighting ensued.

Whereas at the beginning of the night, the Army responded with measure , the order was later given to use force without restraint. It was no longer a question of fighting against terrorists destabilizing Syria, but of saving the country facing an undeclared alien invasion.

Aircraft went into action to destroy columns of mercenaries heading to the capital.

By late morning, calm was gradually returning to the city. The Contras and their collaborators were forced to withdraw everywhere. Traffic was resuming on major roads, and checkpoints were installed in the city center. Life was returning to normal. However, we still hear scattered gunfire here and there. Most businesses are closed, and there are long queues outside bakeries.

Everyone expects that the final assault will be launched on the night of Thursday to Friday and all day Friday. There is no doubt that the Syrian army will emerge victorious again, the power relationship being to its advantage. The conscript army is supported by the population, including the domestic political opposition.

As expected, Arabsat and Nilesat had disconnected the Ad-Dunya television signal in the middle of the afternoon. The Twitter account of Ad-Dounia has been hacked by the CIA in order to disseminate false messages announcing a retreat of the Syrian Army.

Gulf channels have announced a currency collapse prelude to the downfall of the State. The Governor of the Central Bank, Adib Mayaleh, intervened on national television to denounce the new disinformation and confirm the exchange rate of 68.30 Syrian pounds per U.S. dollar.

Press conference by General Robert Mood on the Battle of Damascus which he observes from his hotel room.

Reinforcements have been deployed around the Umayyads Square to protect public television studios considered a priority target for all enemies of freedom. Replacement studios have been installed in the Rose of Damascus Hotel where United Nations observers are basking. The presence of these officials, who allowed the perpetration of this attack on the capital without interrupting their idleness, is the de facto protection for Syrian journalists risking their lives attempting to inform their fellow citizens.

At the Security Council, Russia and China have for the third time vetoed a draft Western and Gulf resolution to enable international military intervention. Russian and Chinese representatives have tirelessly denounced propaganda aimed at portraying the foreign attack against Syria as a revolt repressed with bloodshed.

The Battle of Damascus is expected to resume tonight.

CNL Editor’s note:
French journalist Thierry Meyssan was one of the first journalists to challenge the official account of events occurred on 9/11 with the book – 9/11: The Big Lie (L’Effroyable imposture – published in March 2002). The book was translated into 28 languages. Meyssan is staying in Damascus (Syria). (3)

Disclaimer: The views expressed in these articles and video are the sole responsibility of the author and do not necessarily reflect those of CanadaNewsLibre. The contents of these articles and video are of sole responsibility of the author(s). CanadaNewsLibre will not be responsible or liable for any inaccurate or incorrect statements. The CNL grants permission to cross-post original CanadaNewsLibre articles and videos on community internet sites as long as the text & title are not modified. The source and the author’s copyright must be displayed. http://canadanewslibre contains copyrighted material the use of which has not always been specifically authorized by the copyright owner. We are making such material available to our readers under the provisions of “fair use” in an effort to advance a better understanding of political, economic and social issues. The material on this site is distributed without profit to those who have expressed a prior interest in receiving it for research and educational purposes. If you wish to use copyrighted material for purposes other than “fair use” you must request permission from the copyright owner.