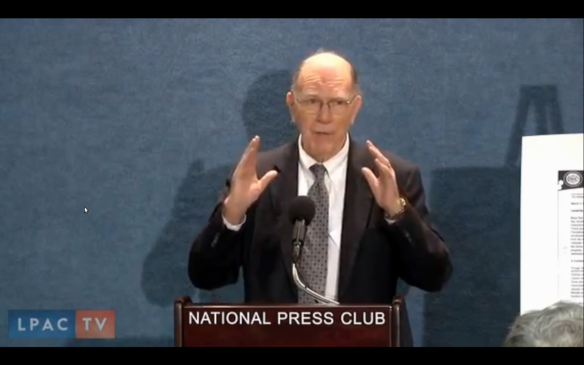 “… neither Obama nor Romney (are) qualified to deal with the crisis. (…) the economic policies of both Obama and Romney will make it impossible for the U.S. East Coast to recover from the devastation brought by Hurricane Sandy.”

“(…) we are on the verge of events which are beyond the understanding of most people in the United States, including some leading people, who have no comprehension of what’s about to happen during the middle of this week, onward.”

“(…) we’re headed toward a thermonuclear warfare. If it occurs, it will be global.” – Lyndon LaRouche (emphasis added)

LPAC – November 2, 2012 – Lyndon LaRouche today returned to the National Press Club in Washington, D.C., for the first time since 1986, to deliver a powerful repudiation of both of the two major party presidential candidates, and warn that the world is facing the gravest crisis in modern times, centered on the immediate danger of thermonuclear war and a trans-Atlantic hyperinflationary breakdown. (…) – emphasis added

“The conference was attended by diplomats from Western Europe and Africa and by media from the United States, Eastern Europe, the Middle East and South America. The entire event was recorded by three TV networks, including LPAC TV (…)”  (1)

“The probability is that nobody will know who got really elected, when, for some time to come beyond this coming Tuesday because the fraud which we know of (…) is such that we may not know who actually won.”

On the Eve of the Election: Transcript
November 3rd, 2012

Disclaimer: The views expressed in these articles and videos are the sole responsibility of the author(s) and do not necessarily reflect those of CanadaNewsLibre. The contents of these articles and videos are of sole responsibility of the author(s). CanadaNewsLibre will not be responsible or liable for any inaccurate or incorrect statements. The CNL grants permission to cross-post original CanadaNewsLibre articles and videos on community internet sites as long as the text & title are not modified. The source and the author’s copyright must be displayed. http://canadanewslibre may contain copyrighted material the use of which has not always been specifically authorized by the copyright owner. We are making such material available to our readers under the provisions of “fair use” in an effort to advance a better understanding of political, economic and social issues. The material on this site is distributed without profit to those who have expressed a prior interest in receiving it for research and educational purposes. If you wish to use copyrighted material for purposes other than “fair use” you must request permission from the copyright owner.