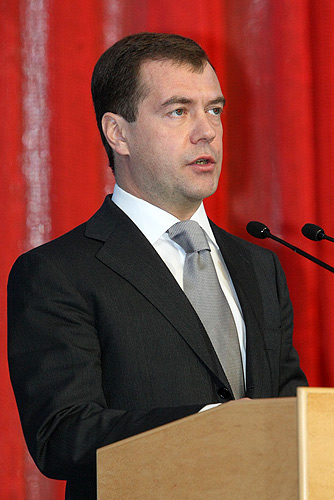 Russian Prime Minister Dmitri Medvedev minced no words in his criticism of French recognition of the Syrian rebels, in a wide ranging interview with Le Figaro and Agence France Presse on the eve of a visit to Paris. His interviewers noted that France was the first nation to give recognition to the Syrian opposition, and is even considering send it weapons. Medvedev replied by reminding them of the principle enshrined in international law, which was approved by the UN in 1970 that “not a single country, not a single state, not a single government should undertake any action directed at the forcible replacement of an acting government in any other country.” When a country sides with a force that is not formally in power, such action is directed at tipping the balance of power in that state. “From the point of view of international law, this seems to me absolutely unacceptable,” he said. Assad’s fate, he said, as well as who should rule the country should be decided by the Syrian people. “It’s advisable that [the opposition] should come to power via a legal procedure, not as a result of being supplied with arms by some other country,” he said. “Therefore, the desire to influence another country’s government by recognizing some political force as the sole bearer of its sovereignty doesn’t seem to me entirely civilized.” (emphasis added)

(1) This file comes from the website of the President of the Russian Federation and is copyrighted. This file is licenced under the Creative Commons Attribution 3.0 Unported Licence. In short: you are free to distribute and modify the file as long as you attribute http://www.kremlin.ru.