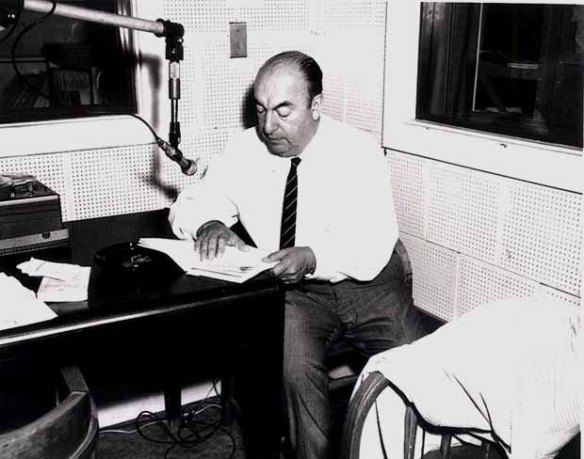 “The death of the internationally acclaimed poet, who was 69 at the time, was officially attributed to prostate cancer and the effects of acute mental stress over the military coup. Earlier this year, however, an official investigation was launched into Neruda’s death following allegations that he had been murdered.” – Joseph Fitsanakis

The government of Chile has launched an official search for a United States suspect in connection with the alleged poisoning of celebrated poet Pablo Neruda. The Chilean literary icon, who was awarded the Nobel Prize in Literature in 1971, died on September 23, 1973. His death occurred less than two weeks after a coup d’état, led by General Augusto Pinochet, toppled the democratically elected  Popular Unity government of Salvador Allende, a close friend of Neruda.

The death of the internationally acclaimed poet, who was 69 at the time, was officially attributed to prostate cancer and the effects of acute mental stress over the military coup. Earlier this year, however, an official investigation was launched into Neruda’s death following allegations that he had been murdered. The investigation was sparked by a comment made by Neruda’s personal driver, Manuel Araya, who said that the poet had been deliberately injected with poison while receiving treatment for cancer at the Clinica Santa Maria in Chilean capital Santiago.

Investigators are still awaiting the completion of a complex autopsy performed on Neruda’s remains, which were exhumed in April. But the Chilean government has already issued a search order for a medical doctor —or someone pretending to be a doctor— who was allegedly on Neruda’s bedside on the night of his death. The search was issued based on comments made recently by another medical doctor, Sergio Draper, who supervised Neruda’s hospital treatment in September of 1973. Dr. Draper told government investigators that he turned over his shift that night to a “Dr. Price”, a young doctor in his late 20s, who was with Neruda in the hours leading to the poet’s death.

According to Rodolfo Reyes, a lawyer representing the Neruda estate, Dr.Price’s identity remains a mystery. The lawyer told Chilean newspaper La Tercera back in April that Dr. Price is believed to be an American “with blue eyes and very good manners”. Some supporters of the view that Neruda was poisoned claim that the physical description of Dr. Price is very close to that of Michael Townley. Townley was an agent of the United States Central Intelligence Agency who was hired by DINA, the secret police of the Chilean dictatorship, to assassinate Orlando Letelier, a Chilean former diplomat who was a vocal opponent of the Pinochet regime.

Townley was arrested following Letelier’s 1976 assassinating in Washington, DC. He was convicted to only 62 months in prison, in return for agreeing to collaborate with US government investigators. But there is said to be unconfirmed evidence that Townley, who is currently living under the US federal witness protection program, was in Florida at the time of Neruda’s death in Santiago. Chilean government investigators say there is no entry for a “Dr. Price” in the registry of hospital staff at the Clinica Santa Maria during the time of Neruda’s death.

* Image reference:
Pablo Neruda during a Library of Congress recording session, 20 June 1966 – This work is in the public domain in the United States because it is a work prepared by an officer or employee of the United States Government as part of that person’s official duties under the terms of Title 17, Chapter 1, Section 105 of the US Code. Source : commons.wikimedia.org/wiki/File:Pablo_Neruda_(1966).jpg

Disclaimer: The views expressed in this article and video are the sole responsibility of the author and do not necessarily reflect those of CanadaNewsLibre. The contents of this article and video are of sole responsibility of the author(s). CanadaNewsLibre will not be responsible or liable for any inaccurate or incorrect statements. The CNL grants permission to cross-post original CanadaNewsLibre articles and videos on community internet sites as long as the text & title are not modified. The source and the author’s copyright must be displayed. canadanewslibre.com may contain copyrighted material the use of which has not always been specifically authorized by the copyright owner. We are making such material available to our readers under the provisions of “fair use” in an effort to advance a better understanding of political, economic and social issues. The material on this site is distributed without profit to those who have expressed a prior interest in receiving it for research and educational purposes. If you wish to use copyrighted material for purposes other than “fair use” you must request permission from the copyright owner.