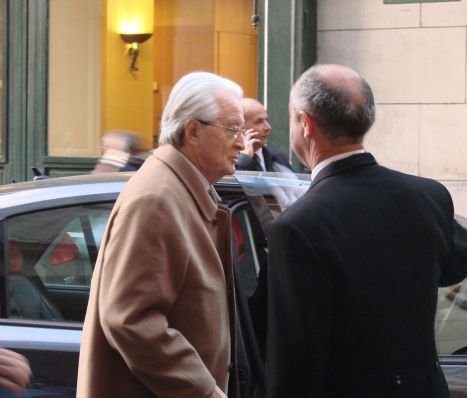 LPAC: “On June 10th Roland Dumas, former French Foreign Affairs Minister, made some rather shocking revelations on Britain’s role in the war against Syria…”

Roland Dumas: “Just about two years ago, before the hostilities started in Syria, (…) Britain was preparing an invasion of the rebels into Syria.”

Dr Webster Tarpley: “This is the big strategic fact: the British and the French are ready to fight to the last American! Isn’t that great!”

Nigel Farage: “The British government is the most enthusiastic country in the entire international community to get involved in Syria.“

On June 10th Roland Dumas, former French Foreign Affairs Minister, made some rather shocking revelations on Britain’s role in the war against Syria, on a program called “This Concerns You” aired on the Parliamentary TV network, LCP. As president of the French Constitutional Court, Dumas was not exactly a friend of former French presidential candidate and Lyndon LaRouche ally Jacques Cheminade, and played a central role in targeting him. But despite his many shortcomings, Dumas always took the side of Arab countries, enjoying historically close relationships with the Syrian and the Libyan governments.

LCP interviewed Dumas along with three others on the situation around Syria.

Dumas explained, “It’s very complicated because of the fact that everybody is involved. But essentially, that’s what it is. There are two camps fighting each other — look, let me tell you something. Just about two years ago, before the hostilities started in Syria, I happened to be, by chance, in Britain, for reasons having nothing to do with Syria. And I met with British officials, some of whom are my friends, who admitted to me, soliciting my participation, that something was being prepared in Syria — and this was in Britain, not in America — Britain was preparing an invasion of the rebels into Syria. And, they had even asked me, under the pretext that I had been a foreign minister, if I would participate in such a thing. Obviously, I said, ‘Quite the contrary, I’m French, this doesn’t interest me.”

“And this is just to say, that this operation came from far away! It was being prepared, conceived, they organized it for them….”

Dumas replied, “Very simple! With the very simple aim! To overthrow the Syrian government, because in the region, it’s important to understand, that the Syrian regime makes anti-Israeli talk. And consequently, everything that moves throughout the region— I was told confidentially by an Israeli prime minister quite a long time ago: we will try to get along with the states throughout the area, and those who don’t get along, we’ll destroy.

“That’s one policy, that’s one conception of history, but after all, why not? But we have to be aware of that.”

Former French Foreign Minister:
The War against Syria was Planned Two years before “The Arab Spring”

“Dumas is a retired French foreign minister who is obliged to use discretion when revealing secrets which could affect French foreign policy. That is why he made the statement ‘I am French, that doesn’t interest me’.  He could not reveal France’s role in the British plan as he would be exposing himself to prosecution for revealing state secrets. (…) Roland Dumas and others like him should be highly commended for having to guts to say what so many others are too morally corrupt, too weak and cowardly to admit.” (2) – emphasis added

“From the very start it’s been the British Government, particularly William Hague and David Cameron, who throughout the entire international community, have been the keenest to get involved in Syria. You know, whether it’s arming the rebels or now, as we see today, the build-up of warplanes in Cyprus, preparations for cruise missile attacks. The British Government has been the keenest of anybody to intervene in Syria. (…) ever since Tony Blair’s time, starting off with Bosnia, we seem to go in for foreign wars with alarming regularity.” (3)

“What hasn’t worked as well, it was the attack upon Iraq which was based on false assumptions and which has created a situation that is very unstable and continues to deteriorate. The intervention in Libya by the British and the French with our backing hasn’t worked out too well and the French and the British haven’t been very effective. We are now pointed toward something somewhat similar but more dangerous in Syria. Because Syria is interlocked with Iran, that poses dangers for the global economy (…) We should be building an international coalition to impose some sort of a solution. We should be seriously negotiating with the Chinese and the Russians (…) Instead we’re essentially gauging the mass propaganda portraying this as a democratic war.” (4)

* The Sykes–Picot Agreement, officially known as the Asia Minor Agreement, was a secret agreement between the governments of the United Kingdom and France,with the assent of Russia, defining their proposed spheres of influence and control in the Middle East should the Triple Entente succeed in defeating the Ottoman Empire during World War I. The negotiation of the treaty occurred between November 1915 and March 1916. The agreement was concluded on 16 May 1916.The agreement effectively divided the Arab provinces of the Ottoman Empire outside the Arabian peninsula into areas of future British and French control or influence.The terms were negotiated by the French diplomat François Georges-Picot and British Sir Mark Sykes. The Russian Tsarist government was a minor party to the Sykes–Picot agreement, and when, following the Russian Revolution of October 1917, the Bolsheviks exposed the agreement, ‘the British were embarrassed, the Arabs dismayed and the Turks delighted. (…) The agreement is seen by many as a turning point in Western-Arab relations. It did negate the promises made to Arabs through T. E. Lawrence for a national Arab homeland in the area of Greater Syria, in exchange for their siding with British forces against the Ottoman Empire.(5) – emphasis added

(1) Partial and rough transcript from: Tell Obama: Hands Off Syria! Say No to British-French-State Dept. War Psychosis!, by Webster Tarpley on The Webster Tarpley Program – UnboundRadio.com, June 11, 2013 (from Min 6:00)

(a) This image file is licensed under the Creative Commons Attribution 2.0 Generic license. – The publishing of this image does not imply that the author endorse this article.

Disclaimer: The views expressed in these articles and videos are the sole responsibility of the author(s) and do not necessarily reflect those of CanadaNewsLibre. The contents of these articles and videos are of sole responsibility of the author(s). CanadaNewsLibre will not be responsible or liable for any inaccurate or incorrect statements. The CNL grants permission to cross-post original CanadaNewsLibre articles and videos on community internet sites as long as the text & title are not modified. The source and the author’s copyright must be displayed. canadanewslibre.com may contain copyrighted material the use of which has not always been specifically authorized by the copyright owner. We are making such material available to our readers under the provisions of “fair use” in an effort to advance a better understanding of political, economic and social issues. The material on this site is distributed without profit to those who have expressed a prior interest in receiving it for research and educational purposes. If you wish to use copyrighted material for purposes other than “fair use” you must request permission from the copyright owner.