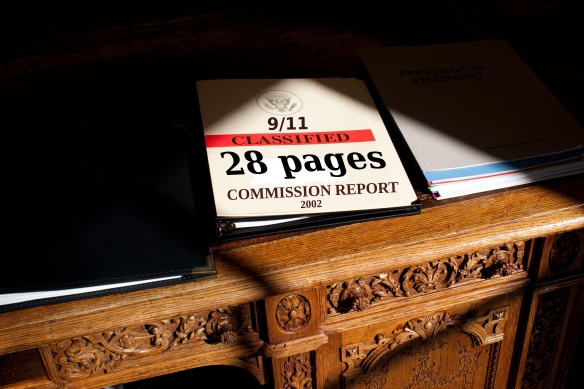 ¨Initially suppressed by the Bush Administration,
and still kept under wraps by Obama.¨

In the last 48 hours, there has been an unprecedented eruption of media coverage pressing for Obama to declassify the 28 pages of the Joint Congressional Report on the 9/11 terror attacks—pages that were classified by George W. Bush in order to protect U.S.-British-Saudi operations, and which Obama twice promised the families of people killed in the 9/11 attacks that he would declassify. But Obama has been “a liar,” as one family member, Matthew Sellitto, said at the Washington, D.C. press conference on Sept. 9.

Until those pages are released, “America won’t survive,” said Rep. Walter Jones (R-N.C.) in a Sept. 11 radio interview; and radical Islamic terrorism cannot be defeated, said Rep. Stephen Lynch (D-Mass.) in an MSNBC-TV interview Thursday. Speaking the day after Obama announced his non-strategy to defeat the Islamic State of Iraq and Syria (ISIS), Lynch told MSNBC that disclosure of the 28 pages “would inform our anti-terrorism policy going forward,” and that disclosure would allow the American people to understand “the complexity, the months of planning, and the individuals who were complicit” in the 9/11 attacks.

The following five items on the importance of declassifying the 28 pages have appeared over the past 24 hours:

* Sept. 11, PBS NewsHour, “Classified Pages of a 9/11 Report May Implicate Key U.S. Ally.” Reporter Jeffrey Brown opened, saying that “Twenty-eight pages of a joint Congressional inquiry into the 9/11 attacks were classified by the George W. Bush Administration, which claimed they contained information that would hurt the war on terror.

“But some lawmakers argue the pages reveal little about national security and a great deal about the government of Saudi Arabias role in the attacks. They say that the pages tell the story of Saudi officials meeting with and even funding two of the 9/11 hijackers when they first arrived in the U.S.”

Brown brought on Lawrence Wright, author of The Looming Tower and a lengthy New Yorker magazine article earlier this week, where Wright presented an in-depth exposé of Saudi Arabian involvement in 9/11. “[C]ongressmen that I have spoken to who have read those 28 pages say it has nothing at all to do with national security, that the Bush Administration and the relationship with the Saudis is implicated,” Wright said. “And they also admit that it has something to do with the two Saudi hijackers who came to America in January of 2000.”

Two of the hijackers went to Southern California, where “they found a benefactor in a Saudi man named Omar al-Bayoumi, who lived in San Diego. He drove up to Los Angeles, went to the Saudi Consulate and there met with an official in the Ministry of Islamic Affairs, Fahad al-Thumairy.”

Wright details more of al-Bayoumi’s role, including as a Saudi “spy,” and relationship with other members of the “support” community for the hijackers, and the role of Saudi Prince Bandar Bin Sultan and his wife.

Waving off the rhetoric that Bandar himself called for declassifying the pages, Wright says, “Bandar’s wife, as it happens, is one of the people that is mentioned in—maybe not in the—I can’t say about these 28 pages, but in [a lawsuit] that those two people that helped the hijackers, one of them, Omar Bayoumi, and Osama Basnan, Basnan was receiving money. His wife was receiving money from Bandars wife, supposedly for a medical condition.”

“The suit against the Saudis alleges that some of that money found its way into the hands of the hijackers.”

* Sept. 11 MSNBC interview by host Chris Hayes. A seven-minute spot on the 28 pages, interviewing Reps. Lynch and Jones, focussed heavily on the Saudis (opening with Kerry’s visit to Saudi Arabia), and the implications of what’s contained in the 28 pages for today’s conflict with ISIL. Both Congrssmen stressed that the American people have the right to know the truth about what happened on 9/11. Hayes raised the question of Saudis and Qataris financing ISIS, and Jones insisted that we should let the 9/11 families and the American people “know the truth and decide for themselves.” When Hayes asked about the Saudis, saying that they want the 28 pages disclosed, Lynch answered—as he had in the Sept. 9 press conference—that there may be “some duplicity” on the part of the Saudis, adding that they don’t want it disclosed.

* Sept. 11, Off the Grid interview on the Jesse Ventura show. Rep. Walter Jones said in the ten-minute interview, that “there is a drumbeat, a drumbeat” to release these pages, as he called for listeners to pressure their members of Congress to support House Resolution 428. He also called for U.S. Senators to join him and the two other H.R. 428 co-sponsors, Lynch and Rep. Thomas Massie (R-Ky.), by sponsoring a parallel resolution in the Senate. With Ventura thanking him profusely for his courage, Jones warned that the United States won’t survive without the truth getting out.

* Sept. 11, WTSP Television, Tampa/Sarasota, Florida, interview with former Sen. Bob Graham (D-Fla.). “Why has the Federal government, including some of its most prestigious agencies, gone to such lengths to cover up what they know?” Graham asks. The station reports on what it calls “a major FBI cover-up” of the Bureau’s own investigation of the Saudi connection to the 9/11 hijackers, some of whom were living in Florida before the 2001 attacks. According to Graham, the 28 pages show “an even stronger connection to Saudi Arabia’s involvement.”

“This is one of the few things I have trouble going to sleep at night.” Graham says, adding, “I am not the Lone Ranger on this. In fact, the people who know the most about it are the ones who have the most trouble sleeping.”

* On Sept. 11, Australia’s Sydney Morning Herald and the Brisbane Times ran an article titled “Claims of Saudi Hand in September 11 Attacks Hang Over Obama’s Speech.” The story begins: “It was ironic that the launch of Barack Obama’s war on terror coincided with the 13th anniversary of the September 11 attacks, doubly so because it meant the president’s pitch for Saudi Arabia to join his global coalition coincided with renewed attention on claims that Washington was suppressing evidence of Saudi complicity in the strikes on key U.S. cities. Initially suppressed by the Bush Administration, and still kept under wraps by Obama.”

* The publishing of these images does not imply that the author(s) endorse this article.

Disclaimer: The views expressed in these articles and videos are the sole responsibility of the author(s) and do not necessarily reflect those of CanadaNewsLibre. The contents of these articles and videos are of sole responsibility of the author(s). CanadaNewsLibre will not be responsible or liable for any inaccurate or incorrect statements. The CNL grants permission to cross-post original CanadaNewsLibre articles and videos on community internet sites as long as the text & title are not modified. The source and the author’s copyright must be displayed. canadanewslibre.com may contain copyrighted material the use of which has not always been specifically authorized by the copyright owner. We are making such material available to our readers under the provisions of “fair use” in an effort to advance a better understanding of political, economic and social issues. The material on this site is distributed without profit to those who have expressed a prior interest in receiving it for research and educational purposes. If you wish to use copyrighted material for purposes other than “fair use” you must request permission from the copyright owner.