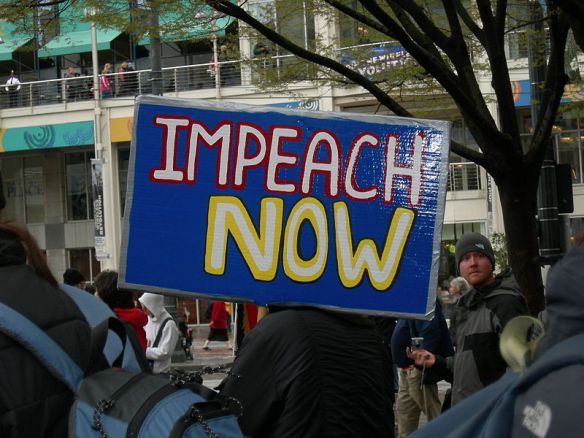 The last 24 hours have seen the “instant” spread of support for Rep. Walter Jones’ impeachment-threat resolution continue. House Concurrent Resolution 107 says that the President commits an impeachable crime if he starts military action without authorization from Congress as the Constitution requires. Congress has been in recess since it was introduced on March 7, but support has resonated around the country END_OF_DOCUMENT_TOKEN_TO_BE_REPLACED

Yesterday Rep. Walter Jones, republican of North Carolina, introduced H. Concurrent Resolution 107, which calls on the House, the Senate Concurring, to do the following:

Mr. JONES submitted the following concurrent resolution; which was referred to the Committee on the Judiciary

Expressing the sense of Congress that the use of offensive military force by a President without prior and clear authorization of an Act of Congress constitutes an impeachable high crime and misdemeanor under article II, section 4 of the Constitution.