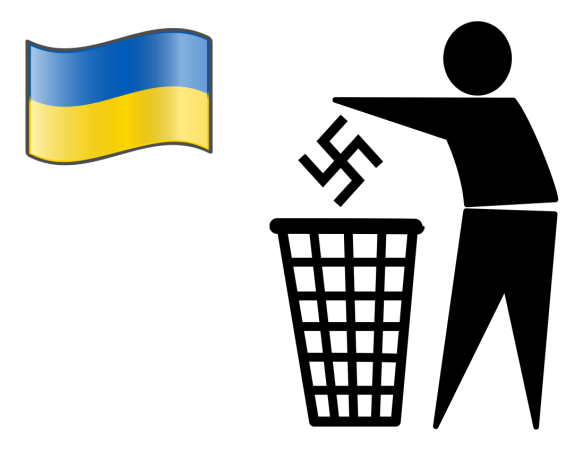 Derivative from an image by worker / openclipart.org *

”The preparations for this “democratic Coup d’Etat” had been carefully coordinated between the US State Department (and Western intelligence) and various political actors in Ukraine including the Svoboda party.(…) Western media reports failed to acknowledge the role of armed Neo-Nazi gunmen and thugs who had integrated the protest movement and who were involved in systematically inciting violence. We are dealing with a diabolical agenda: the deaths of protesters in Maidan square triggered by Neo-Nazi elements have been used to break the legitimacy of a duly elected government.” (1) – Prof. Michel Chossudovsky, award-winning author, Professor of Economics (emeritus) at the University of Ottawa

“The chosen U.S. puppets have lost control of the protests to armed radical elements with historical links to nazism (…)” (2) ”The Right Sector’s roots go back to the Ukrainians who fought for Adolf Hitler against the Soviet Union during World War 2. It was the Right Sector that introduced armed fighters and turned the tide of the protests in Kiev from peaceful protests in favor of joining the EU to violent attacks on police with the view of overthrowing the democratically elected government, which the Right Sector succeeded in doing.” (3) Paul Craig Roberts, Former Assistant US Treasury Secretary